The logic board of every Apple laptop or desktop computer is the main circuit board where components interact with each other. This maintains the normal function of the computer. With a logic board failure, we can expect a loss of communication within the device, and eventually a system crash. The CPU, the brain of the computer, can’t send signals through the logic board, the nerve centre, to the rest of the system.

This kind of failure can cause complete system failures that can make it very hard to test for. Logic board failure is known as one of the hardest things to diagnose and repair. It involves a lot of thorough testing and delicate parts to navigate through. In this guide, we will go through the main causes of logic board failure, and what you can do for your Apple laptop or desktop Mac.

Logic board vs motherboard

Causes of logic board failure It’s an easy mistake to make. Knocking over a drink or any liquid on a laptop can be a scary thing to face, as the delicate computer hardware could get ruined. When liquid gets into the inside of a laptop computer, the first thing to go would be the logic board, sometimes the keyboard will get damaged as well. The connecting points on the logic board will stop working from the liquid, and this can cause the eventual failure of the entire board.

Don’t panic if you find yourself in a laptop liquid spill accident. The first thing you should do is to remove the laptop from its power source. Don’t try to clean it off with things like a hair dryer either! Unprofessional cleaning treatment like that can cause possible further damage on other parts of the computer. If this heat is not dispersed quickly, the system will overheat. This can cause connecting points or parts of the logic board to warp, which will result in a logic board failure. Inefficient heat dispersion can be caused by large dust build up, or a faulty cooling fan.

As we already know, many hardware components do not last very long. We can’t predict logic board failure from natural wear and tear damage, but it is still one of the factors that cause this failure.

Sometimes the damage on the logic board isn’t visible enough to see, this kind of damage can also reflect on your computing experience.

When a logic board does fail, components lose their channels of communication and can’t interact with each other. This majorly affects how the computer works. It can generally lead to unexpected system crashes, or a complete system failure.

Certain signs of a faulty logic board

Or, if you find that the USB ports next to the HDMI / MIDI ports aren’t working, you could also have a logic board issue. The video ports are directly connected to the logic board, and any failure that area could affect the connectivity of ports and components.

A logic board can “come back to life” after “dying”, but will probably crash again. Unfortunately, a faulty logic board doesn’t show that many early warning signs to prevent crashes from happening. Without a functioning motherboard, your system just won’t work at all. It’s important to test your system to confirm these faults, then get a repair solution.

How to test your logic board for issues

We’ve mentioned briefly above about testing the logic board by method of eliminating other issues. This involves testing the RAM and video card, and the hard drive, if needed.

It also depends on whether your computer passes POST (Power-On Self Test). When you start your computer, the system goes through POST. This tests things like CPU, memory, and network interfaces. If the computer hardware passes POST successfully, you’ll get to the Apple logo splash screen or a light gray background.

If your Apple laptop or desktop Mac passes POST, you’ll need to test your hard drive, RAM, and GPU. If not, only test the RAM and GPU.

Disk Utility First Aid and Apple Diagnostics can help you test your hard drive for issues. Hard drive failure can cause problems with startup, and other performance and storage related issues. Errors like a question mark folder showing at startup can mean you have a hard drive issue.

Check your hard disk with Disk Utility by running First Aid if your Mac does boot successfully. First Aid can help you detect and repair bad sectors, and prevent premature failure as well. If your computer is unable to startup successfully, you can run Apple Diagnostics at startup. Press the “D” key when you reach the Apple splash screen to run Apple Diagnostics. You’ll be able to find possible issues with hardware like the hard drive, battery, or RAM.

For more thorough tests, you may also use dedicated hard drive analysis software like WD Drive Utilities for Mac. You’ll need to test the drive on a separate Mac desktop via a USB to SATA enclosure box. This keeps the drive isolated from other factors that could affect its performance.

You may move on to testing other components if your hard drive is running properly. If you do find that your hard drive is faulty, follow our guide on how to test and repair a faulty Apple hard drive. You can consider yourself lucky if you only have a hard drive issue, as they are much easier to fix than the logic board. RAM can come in either detachable chips or is embedded onto the logic board (most laptops have this). This affects how we’re going to test for issues on the RAM.

For Apple desktop Macs like iMac and Mac Mini, you can remove the RAM chip for testing. This might not be the case for most Apple laptop Macs from 2012 and onwards. They have their RAM built-in on the logic board. Just to make sure, you may simply open up your laptop to take a look whether the RAM is embedded on the motherboard.

With Apple Diagnostics, you can test both detachable and embedded RAM for issues, if your Mac does pass POST. If you can also get your Mac to start up properly, running RAM testing software like MemTest86 could also be helpful.

Remember what we mentioned before about embedded RAM being part of the logic board? With a RAM error on your laptop with built-in RAM, you can conclude that you have a faulty logic board. If you do find that your detachable RAM chip is faulty, all you need to do is replace it. Otherwise, we can move on to testing the video card.

If your computer turns on but stays on a black screen, that means it’s not passing POST. You’ll need to take out your current RAM chip and test your system with a spare working RAM chip. This only applies to desktop Macs as most laptop RAM can’t be taken out. 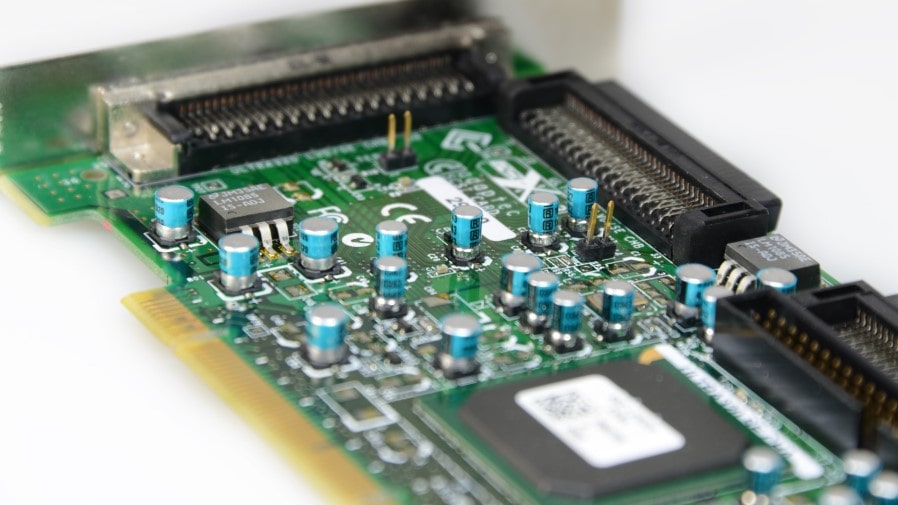 Again, Apple Diagnostics can also help you test your video card if your Mac passes POST. Running analysis software like FurMark from Geeks3D can also get you more in-depth results with a video card test.

If your Mac does not POST, you can only test your video card when it is separate from your motherboard. Most Apple Mac laptops have embedded GPU on the logic board, so you can’t take it out to test on a different desktop Mac.

You’ll either be able to find a logic board failure by eliminating all other possibilities, or by finding a fault with a component embedded on the logic board. To repair this, you’ll usually need to get the logic board repaired.

Thinking about replacing your logic board by yourself?

Logic boards as the main circuit board for a Mac, contain complex parts and connecting points. Replacing one is one of the most difficult computer repairs to do, even for experienced technicians like us.

For those skilled at DIY and tech, replacing a logic board by themselves would definitely be a time-efficient solution for a logic board failure. But because of the complexity of the logic board, a replacement usually only has a 70-80% success rate. In most logic board repairs, everything in the computer will have to be taken out and put back after replacing the board. If you are unsure about doing all this, you might want to leave it to a professional.

Confident in your DIY skills? You can find tons of logic board replacement guides online from ifixit. Guides specific to your Mac’s model might also be available on there. But first, you’ll need a new logic board.

Logic boards are often made tailored to the model of computer, fit to size and interface. The different dimensions of Mac laptops may also change the logic board’s size and how everything fits on it. You’ll need to buy the exact same logic board model as a replacement. Find out which model of logic board you have, then refer to the universal model part numbers that Apple branded parts have when you’re buying it online or in-store.

A few things to mention…

Protecting your logic board

While some logic board failures are out of our hands, keeping some healthy computing habits can help you avoid things that cause them. This might be keeping your computer’s ventilation clear and clean, and making sure that your cooling system is in shape.

The cooling fan can draw dust into your laptop or desktop Mac. Excess dust accumulated inside your computer can trap heat, which can hinder heat dispersion. If this heat is not dispersed, your computer may also work slower than usual due to overheating.

You may only need to clean the inside of your computer once a year to keep it dust-free, so it’s not that big of a task. Using cleaning products like lint-free cloth and isopropyl alcohol could come in handy for this.

Making sure that your cooling system is in shape

The cooling fan is the barrier against overheating, so you might want to keep it healthy and working properly. If the fan is making abnormal rattling sounds while it’s running, that’s an obvious sign that it is failing. You may also test its status by running Apple Diagnostics.

Keeping the ventilation outlets clear might also be a good idea for proper airflow. Instances like using your laptop on cloth surfaces can block ventilation and trap heat.

Getting a professional repair

Logic board repairs and replacements are quite difficult and it’s understandable to get a professional to do it. After you’ve understood the whole process, you can get a better idea of what’s needed for the computer to work again.

Going to the Apple store can usually get you free servicing for no fee if your device is under a valid warranty or Apple care. With that said, you might want to check whether your Apple care or warranty is valid or not. Apple might not be able to provide support if not, or that your device is considered obsolete for servicing. This includes Apple laptops or desktop Macs from 2012 and before.

A third-party repair service can help you where the Apple store cannot. Or you may be wanting to go somewhere closer to you. As a highly rated computer repair service in Sydney, our experienced technicians at Safemode Computer Service can help you with a logic board replacement. We are located in the Inner West, a close-by option for all your computer repair needs. We can help you diagnose laptop or desktop issues, and provide the right solution for you. Ask us more by calling or visiting our Enmore store today.