We can help. There is a chance that your laptop needs a new battery.

I’ll explain to you how to work out if your laptop battery is faulty and if it needs to be replaced.

1. How do I know if the battery is dead?

There are few things you can test when your laptop is not charging.

These are the four parts that your laptop needs for its juice:

When any of these four parts is damaged, this can get in the way of the charging process. So you probably shouldn’t jump to conclusions when you find that your laptop is not charging.

To test the battery itself, you can use pre-boot diagnostics. This is a quick diagnostic test that checks hardware across your laptop.

It can test the battery, along parts like the hard drive and fans.

You’ll need to restart your laptop, then press a specific key to trigger pre-boot diagnostics.

Each brand of computer comes with their specific key for this test. For example, it’s “F12” for Dell computers, “Esc” for HP computers, and “D” for Apple Macs.

On Apple MacBook laptops, if Apple Diagnostics reports a SMC failure, you can also confirm a logic board failure. The motherboard is where power runs through to reach the battery, so the battery will be unable to charge without this channel.

2. My laptop won’t turn on. Is the battery dead?

Contrary to popular belief, you don’t actually need a working battery to turn on your laptop.

A laptop that won’t turn on might make most laptop users think they need a battery replacement, but that isn’t so. It’s a common scapegoat for dead laptop issues.

Even if you do have a dead battery, you should still be able to turn the laptop on, as long as it is plugged in to the power adaptor (charger pack).

The battery is only the part that stores power to use while the laptop isn’t plugged in. It’s not the part that powers up your laptop.

The power current goes from the charging port to the motherboard, where power goes through the circuit board to all the other parts of the laptop.

So when your laptop won’t turn on, it’s not because of a dead battery.

It isn’t simply the motherboard’s fault either, it could be some other hardware issue.

A dead laptop can mean a few hardware failures coming from either the motherboard, RAM, or video card. These components are crucial for the laptop’s start up process, and when one falls, the laptop might not be able to turn on.

3. Do I need to unplug my laptop once it reaches full charge? 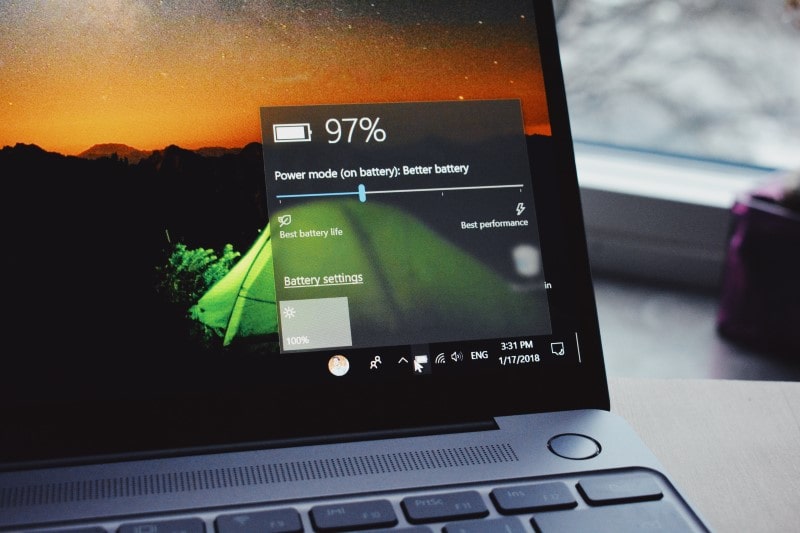 No, you don’t need to unplug your laptop once it reaches full charge. Leaving the charger cable plugged in your laptop won’t “overcharge” or harm the laptop’s battery life.

I can tell this from my own experience of having seen thousands of computers that need repairs.

I myself have always preferred plugging the charger in whenever I can. While my wife has always used her laptop on battery. Both of our laptops have lasted for well over 8 years!

So, you don’t have to worry about leaving your laptop to charge overnight. You can just leave the charger in while you use it, while you’re not using it, anytime really.

The lithium-ion batteries on modern laptops are made with a mechanism that is designed to stop charging the battery once it reaches full charge.

This avoids the accidents that may happen if the battery keeps charging and starts to heat up. If you click on the battery icon on your laptop, you should see it indicating “plugged in, charging” or “plugged in, fully charged”.

If you’re concerned about battery life deteriorating, that shouldn’t be a big problem with lithium-ion batteries. Lithium-ion batteries are also made to be able to be recharged over and over again, without losing their power capacity.

You could charge your laptop hundreds of times and that wouldn’t change its average battery life and performance. Of course, after about 600 charging cycles or more, the battery could lose its performance and start to fail. Then you’ll need to replace it.

4. What does “service battery” on my MacBook mean?

Apple MacBook laptops have different battery status indicators that tell users about their batteries and when it needs to be serviced. This includes “service battery”, “replace soon”, or “replace now”. Newer Macs may just show “service recommended”.

“Service battery” means that the battery may be holding less charge or isn’t working as well as when it was new. The battery is still working and can be charged up and used, but will need a little attention soon. You might want to take it to the Apple Store for some TLC.

As we’ve mentioned above, a high charging cycle count means that the battery may be on its way out soon. You can check your cycle count on your Mac, from “System Information”. Go to Hardware > Power, then you’ll be able to see “Battery information”.

There you can find information like your laptop’s full charge capacity and cycle count. You can only look up the maximum cycle count for your Mac model from Apple Support.

5. Should I use a surge protector?

A surge protector can protect your laptop from getting fried by a current gone awry. When a power surge happens, the current is redirected to other sockets and can pass into your laptop through the charger.

This can do all sorts of damage, including burning the motherboard or frying the battery.

However, don’t assume that a power board with surge protector will prevent power spike from damaging your computers completely. It helps, but it’s not 100% protection.

Uninterruptible Power Supply (UPS) is a much better power surge protector for your computers.

If your computer is critically important for your business, you should consider getting a UPS. Many businesses have UPS for their main computers, printers.

Hopefully, we’ve answered what you want to know about your laptop’s power and battery options.

If you need more advice and help with your laptop, we’re here to help! At Safemode Computer Service, located in the heart of Inner West Sydney, our experienced technicians can assist you with any computer issue you have. We fix all computers, whether you have a desktop or laptop, PC or Mac. Call us today, or come on down to our Enmore store!

Safemode Computer Service is a top-rated choice for all your IT needs, both home and small businesses.

Safemode Computer Service is top rated computer and IT service provider for home and small businesses.