Laptop not charging: How to fix a dead battery

A laptop that won’t charge can make things rather hard for people working on the go. Laptop batteries are also a common scapegoat for many other laptop hardware issues. Find out more on how to fix a laptop battery that isn’t charging in this guide.

How your laptop gets its juice

This one should be a no-brainer, right? Your laptop is powered by the battery, and the battery is juiced up from the charger. This battery can be charged over and over without losing charge, which is one of the benefits of a lithium-ion battery.

If any one part in this process is faulty, then you’ll notice that your battery is not charging. Or you may experience other issues like the battery running out of charge very quickly, or charges very slowly. Charger or battery failures are the more common causes of a laptop that isn’t charging. Either way, testing your laptop can help you find out what’s wrong.

Why is my laptop not charging?

A laptop needs a working charger, power socket, motherboard, and battery to be able to charge. That gets you the juice to use your laptop while you’re on the go. When any of these four parts start to malfunction, you might end up having to plug in your laptop all the time. Let’s look at why and how these issues happen. Some of these are quite unavoidable, but you can still fix them pretty easily. 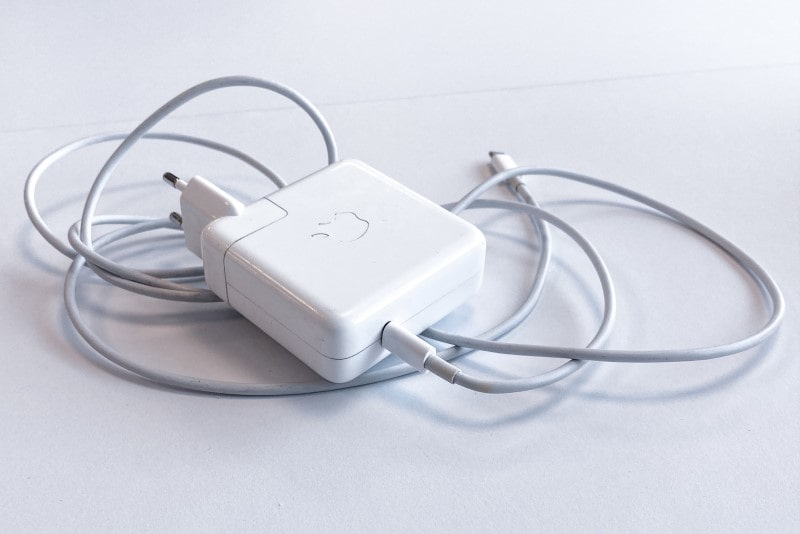 Your laptop charger is where power is transferred from the power point to your laptop. As a power adaptor, it converts the right voltage of power into the laptop. As most electronics do fail after long term use, it could also break down in the same way. This problem comes with a pretty obvious fix: get a new laptop charger, easy as.

Along with long term use, a laptop charger can also get damaged from a power surge. Uncontrolled power surges can kill many parts of the laptop, and the charger as well.

The power socket, where the charger and the laptop connects, can also fail due to long term use. As a connective part, the socket can wear out or get bent out. This makes it harder for the current to get through to the battery. It might still be able to charge the laptop, but may take much longer, and might not even reach full charge at all.

Motherboard failures are very common computer issues that a lot of users may experience. Things like overheating, liquid damage, and physical burn damage from power surges can harm and kill the motherboard. They are also fairly difficult to both diagnose and repair, and can leave the user in quite a pickle.

Want to know more? Learn more about what causes motherboard failures and how to repair them in our guide here.

The great thing about lithium-ion laptop batteries is that they can be used and recharged many times during its lifetime. They also have this built-in circuit mechanism that stops it from charging when it is at full charge. This prevents the battery from overcharging and overheating or burning from being plugged in for a long time, say overnight.

However, after a couple thousand charging cycles, the battery will start to hold less charge, and this may worsen to a point where it will not hold any charge. Power surges can also kill the battery.

Laptop batteries are a consumable part, and will need to be replaced at some point in the laptop’s lifetime. Luckily there are a few ways that you can help maintain its health to keep it working efficiently.

So what are the signs of a dead battery? One obvious sign is that it doesn’t hold very much charge, or not at all. Your laptop might shut down immediately after the power cord comes off. Apple Mac users may even get battery error messages like “service battery”, “replace soon”, or “replace now”. Dell and HP users may also get similar messages to service the battery.

Some serious laptop battery faults can be quite serious. You may notice that the battery is expanded and pushes the touchpad upwards. This can jam or break the touchpad. You definitely should get professional help if your battery is leaking fluid, or feels extremely hot. A damaged battery can leak corrosive liquid or even catch on fire spontaneously.

How to fix a laptop that is not charging

First thing you should do when you can’t seem to charge your laptop is to test the different parts that could be causing the problem. There are a few simple tricks to do by yourself in no time.

Spare computer parts can come in handy when you need to run tests on your laptop’s hardware. If you’ve got a spare charger lying around, you can test your current charger’s status in no time. The spare charger should be able to charge the laptop if it’s a charger failure issue.

Some older laptop models have detachable battery packs that you can swap out with a spare one to test them. However, modern laptops don’t have this feature anymore and taking out the battery on its own can be quite risky and complicated for the average computer user.

For the power socket, you can use a multimeter to test whether it still works. If you’re a pretty handy person, you should already know how to do this. Otherwise, you can check out the many resources on YouTube or ifixit.

Finally, you may choose to use pre-boot diagnostics to run tests on your battery. Pre-boot diagnostics is a built-in tool on all computers for users to diagnose possible issues on their hardware. With this tool, you can test the battery, and other parts like the hard drive and RAM.

If you don’t find anything wrong with your laptop after running these tests and you still can’t fix the problem, it might be time to take the laptop to a professional. You might have a more serious issue, like a motherboard failure. It might be easier to leave it to the experts with these potentially dangerous and complicated hardware issues. Looking for laptop repair shops in Sydney? Taking your laptop to a computer technician can save you the hassle of doing things yourself for sure. That’s where we at Safemode Computer Service come in. As a highly-rated computer repair service in Inner West Sydney, we can help with any computer issue. Whether it’s laptops, desktop computers, or Mac computers, our experienced technicians can help you diagnose and repair your computer. Come on down to our Enmore store, or make an appointment with a technician here.