A Complete Guide to Upgrading Your Hard Drive to an SSD

Boosting your computer’s speed with an SSD upgrade may sound like a big change, and you may not know where to start. There are certainly a few things to consider before you decide to upgrade. Not to worry, here’s a guide to computer storage basics and what you should consider before upgrading to an SSD.

What is computer storage?

We all need a place to store our files, somewhere the data can stay on your computer and even while you’re not using those files or when your computer is turned off. This form of storage is called non-volatile storage. With this, you won’t lose data and have to recreate your work every time you turn on your computer. The main device for computer storage is generally a hard drive or a solid-state drive.

While we mainly store data on hard drives or solid-state drives, these drives work together with your computer’s memory (RAM) to get work done. RAM, random access memory, is a form of volatile storage, stores data that you are working on at the ready, so you can access it faster. Both forms of volatile and non-volatile storage work together to give you a smooth multitasking experience.

What is an HDD?

A hard disk drive, or hard drive is the storage device on your computer. HDDs have been the standard for permanent data storage on computers for many years. Traditionally, hard drives come in two physical sizes, 2.5-inch for laptops, and 3.5-inch for desktop computers

So how does a hard drive work? 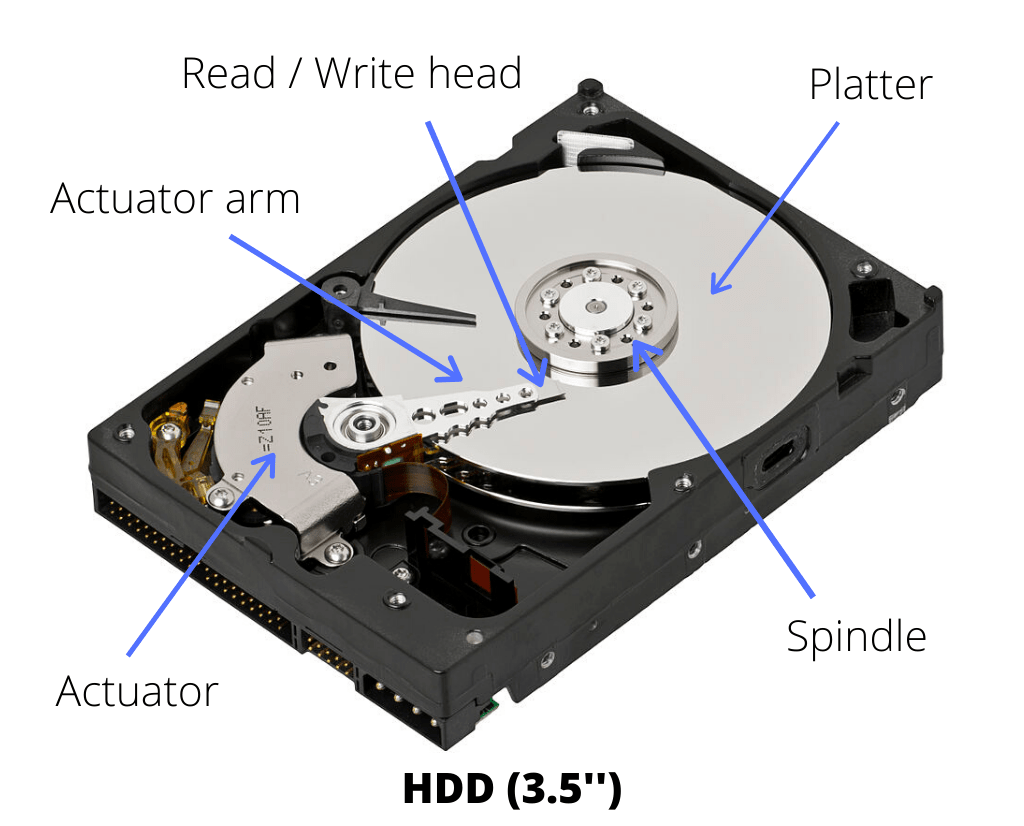 Parts of a hard drive.

Like most things, hard drives will eventually age and wear out. While they can last long, they can cause unwanted issues such as overheating and performance loss. On top of that, because they contain delicate moving parts, dropping your computer while it is operating can also cause significant damage to the disk.

Related:  Top 8 hard drive issues and how to fix them yourself

If you’ve owned your laptop or desktop for a few years and want to keep its performance up to your standard, you may want to start thinking about upgrading to an SSD. Let’s look at the benefits of that. 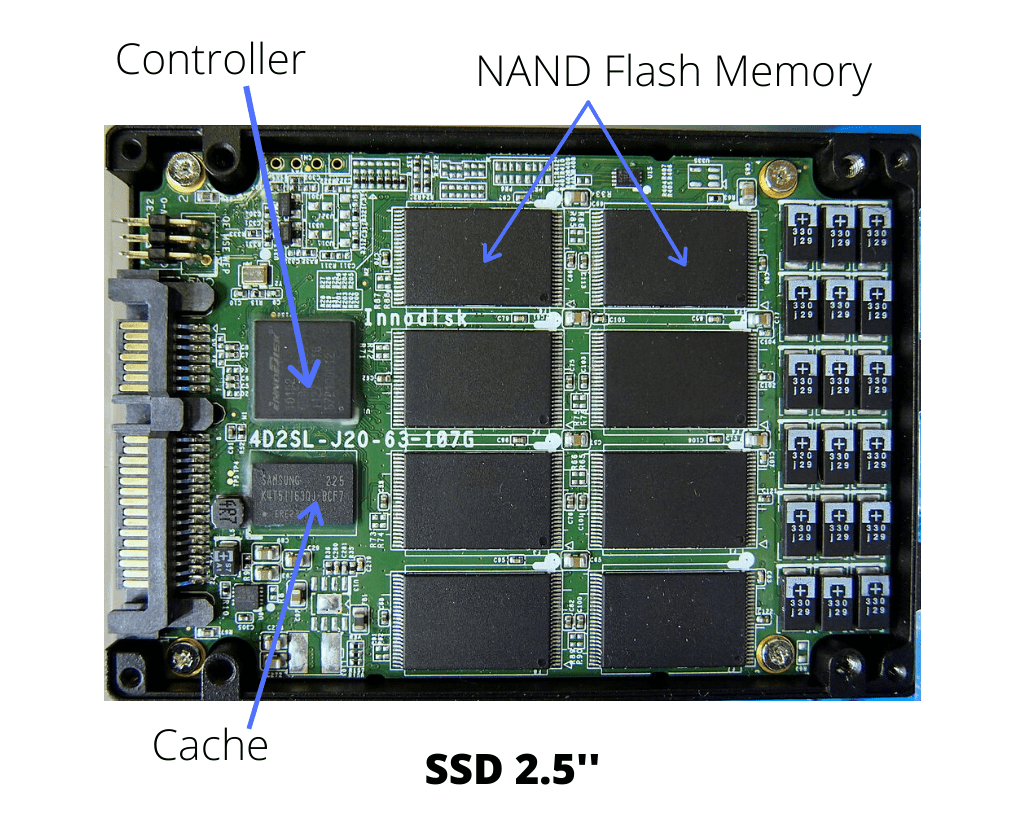 Parts of a solid-state drive.

Solid-state drives are becoming more and more popular in comparison to hard drives, due to its higher speed and reliability. Most new computers use SSDs over the old standard of HDDs. SSDs typically come in 2.5-inch sizes, the size of a standard laptop HDD. A newer type of SSD, the M.2 standard, is much smaller and thinner and can fit in ultra-thin laptops and mini PCs.

The main difference between HDD and SSD is that SSD does not have any moving parts that need to be powered. While HDD works by motorized write and read heads on a disk, an SSD makes use of flash memory, a form of non-volatile computer memory. Simply put, data is electronically written and stays on memory chips, unlike regular RAM, where data is only stored while the computer is powered. This process does not require any moving machinery for data storage.

What are the pros and cons of upgrading to an SSD?

Pros of upgrading to SSD

Without any moving parts, its solid state can withstand physical impact more than a hard drive can. Its shock resistance promises better durability while it is in use and not.

The moving parts of a hard drive draws power to work, and also produces noise and heat. All these issues can be solved by replacing the HDD with an SSD. You can use an SSD as a data drive together with your HDD, but using the SSD as a boot drive allows you to make full use of its benefits.

Cons of upgrading to SSD

While it seems like an easy decision to upgrade to an SSD, one significant downside is its high cost. The cost of SSDs are gradually decreasing, but still remain a lot more expensive than hard drives. A hard drive of the same price of an average SSD can get you a lot more storage.

The storage capacities of SSDs also can’t compare to the largest capacity of a hard drive. Hard drives are still the mainstay if you need to store huge amounts of data. You could consider replacing your hard drive with a newer one, or put your data on external hard drives.

On the bright side, SSD manufacturers are still working to refine their technology and quality of their drives. With this, we can expect price drops and capacity improvements for the near future.

Things to consider before upgrading to an SSD

This may be obvious, but if your computer already comes with an SSD, you do not need to upgrade from an HDD to an SSD. Most newer models make use of SSDs, such as Apple Macbook laptops from 2013 onwards. If you are looking for more upgrades, you may want to look into other hardware upgrades that can boost performance.

When it comes to deciding which SSD is right for you, you may want to think about your main computing needs. The capacity and performance of the drive should be your priority when you are shopping for one. In terms of cost, getting an SSD with larger capacity could provide more value for money.

PCIe SSDs a newer option compared to the more widely-used SATA interface for SSDs. It connects directly onto the motherboard. Compared to one another, both connection types have their relative benefits and disadvantages:

You’ll also need to think about whether the drive’s form factor can fit in your computer. The 2.5-inch size can fit a laptop, but the thickness of the drive is also something to consider. Checking your computer’s manual can help you make this decision.

The smaller and thinner M.2 SSD is also gaining popularity for storage solutions in thinner laptops. For desktop computers that usually require a 3.5-inch size for drives, you may use an adaptor to mount the 2.5-inch SSD.

Users of Apple laptops from 2012 and Mac desktops and can only upgrade to the 2.5-inch SSD with SATA connection, as the laptops do not come with the PCIe connection option.

How do I upgrade to an SSD?

If you’d like to install your new SSD on your own, you can do so with some simple tools and by migrating your data from your HDD to your new SSD. This is a process where you’ll need to clone your drive, which carries over your files, installed programs, and operating system over to your new drive. You’ll be able to boot up exactly as you did before, only with a significant performance boost for your computing experience.

If you find yourself not-so-adept to DIY tasks or would just like to save yourself the hassle, you may want to get your SSD upgrade done by a professional. Our friendly technicians at Safemode Computer Service, one of the best computer services in Inner West Sydney, can definitely provide you with the best advice and service.

If you own an Apple Mac, you might be thinking about taking it to the nearest Apple store. But, an upgrade with Apple may not be possible. Apple does not offer upgrades to every model of their computers, so you may want to check with them before booking an appointment to avoid wasting your valuable time.

For Windows computer manufacturers such as Dell, HP, or Lenovo, you may want to check if there is an authorized service centre near your place. Same with Apple stores, it could be a good idea to make sure they offer such services for your computer.

Otherwise, a third-party computer repair service might be your only option. If you live in Inner West Sydney, surely us – Safemode Computer Service is an option! We are rated among the top three laptop repair centres for the third year in a row by ThreeBestRate :) Or you can look up other computer repair services online to find one near you.