Mac OS X 10.10 Yosemite was released on the 16th October 2014. The new OS by Apple comes with a number of new features and a complete redesign of the operating system layout.

Being a computer enthusiast, I use both Windows and Mac. I like both. Even though I’m not a big fan of the flat design of Yosemite, my Mac laptop is only for personal use with just a few documents and photos, there is actually no important need for an upgrade to 10.10, still I could not resist upgrading my MacBook Pro Retina Display laptop just to try it out.

Opened App Store and did the free upgrade to Mac OS X Yosemite. The process took about 2 hours to finish without any trouble. I was excited to explore Yosemite OS.

Everything seems normal but I did notice a tiny lag when moving the mouse, opening Word document. And I really mean just a “tiny” lag. The problem is, I’m a computer technician and enthusiast, this really annoyed me, the computer must be perfect, a little lag is not right. So I opened Activity under Utility, checked CPU usage and Memory usage. CPU usage is normal with over 80% idle (which later I found out that many Mac users reported high usage after upgrading to Yosemite). However, Memory usage was high, varied from 6.98GB to 7.99GB out of 8GB RAM.

I could tell immediately that this is not normal. 8GB is plenty for having Activity and one Google Chrome window opened. There is just no way that Mac OS system itself would need that much of RAM just to function. This might be a bug in the new Yosemite OS. If it is, it would be too obvious for Apple to realise. So I did some research and found that many Mac users have similar issues with high CPU and RAM usage. These users reported over 90% of CPU usage and RAM usage maxed out on their computers. I didn’t take note of RAM usage on my MacBook Pro 13″ Retina laptop before the upgrade. Fortunately I have another MacBook Pro 15″ Retina with OS X 10.9 Mavericks, I checked RAM usage in this laptop and found it around 4GB-4.5GB of Memory used (with multiple Google Chrome windows opened). Now it’s obvious that RAM usage is way too high. How to fix this problem then? Well, read below.

Repair Disk Permissions in Safe Boot: Shutdown your Mac computer and boot it to Safe Boot. To boot to Safe Boot, hold down Shift button immediately after pressing the power button.

Once in Safe Boot, click on Go at the top menu, select Utilities. Double click on Disk Utility, select your Macintosh HD partition, then click on Repair Disk Permissions. 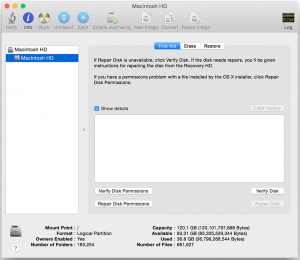 Reset SMC: this instruction applies to MacBook laptop that you should not remove on your own only, if you have a different Mac computer (i.e. iMac), please look up SMC Reset from Apple website.

Reset PRAM: while your computer is off, hold down Command-Option-P-R buttons immediately after pressing the power button on your Mac. You must do this before the Apple logo shows up. During the PRAM reset, you’ll see your Mac laptop turn on, then turn off, and turn back on with the Apple chime. At this point, release all buttons and let your Mac start up as normal.

Once you’ve done all of the above, open Activity and check your CPU and RAM usage again. You should find it back to normal as mine:

I didn’t have issue with high CPU usage, check yours if you had this problem after upgrading to Yosemite.

My MacBook Pro Retina laptop has always start up fast and shutdown in seconds. After upgrading to Yosemite, shutting down took over a minute. The spinning circle got stuck at some stage as if the computer froze, then it spins again and stuck again. Eventually after a minute or more, the laptop finally turned off. If this is a Windows laptop, it could be normal, but not for a Mac, at least not my MacBook Pro Retina. This problem is another thing that really annoyed me.

Inside these 2 folders, you may find several files relating to “parallel”, delete these files by moving them to Trash. I deleted the following files on my Macbook Pro Retina laptop:

I also deleted some other files on my Mac laptop, but you may not have these files:

After deleting these files, restart your Mac. The first restart might still be slow at shutdown, don’t panic, let your Mac restart and try shutting it down again, it should shutdown fast as it used to.